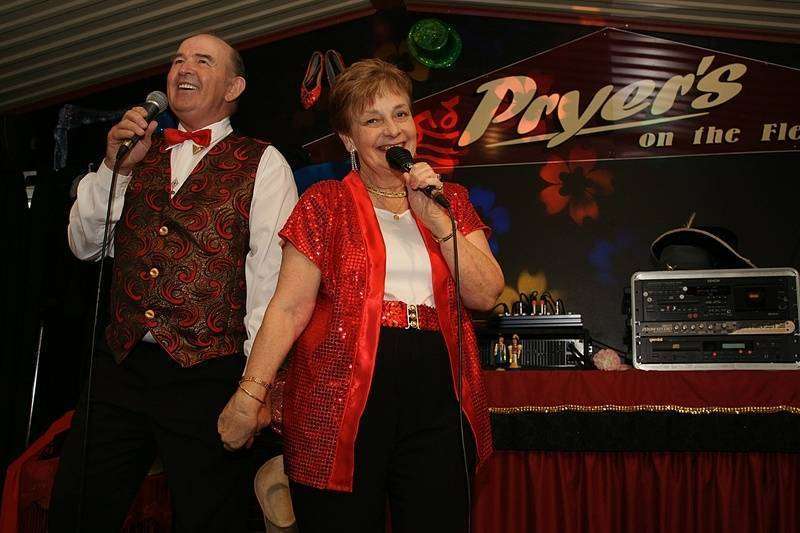 The Pryers on the Fleurieu

As I mentioned in the previous chapter, whilst on a trip with Aldinga Life Care we went to see a show put on by a delightful couple called The Pryers.

I have great pleasure in introducing you to The Pryers, Peter and Rhonda, a truly remarkable couple who have between them created something very special indeed here on the Fleurieu Peninsula. I was invited to do a guest singing spot on their extremely entertaining Cabaret Show.

Since May 2009 I have done many, many shows with them.

I encourage everyone to go and see them, you will laugh a lot, tap your feet and clap your hands a lot, plus sing a lot, and thoroughly enjoy yourselves!!! They are truly fabulous!! ~~ Des, March 2012

“The Pryers On The Fleurieu” – meaning Peter Rhonda Your Entertainers Rural Style.

Peter and Rhonda met in 1997 and soon realized they had a lot in common, their love for music and each other. Peter was one of 17 children, (10 boys and 7 girls) from Moree in New South Wales. Education was very poor in those days and especially for the boys who never really learned to read or write properly, only learning the alphabet and numbers.

When Peter was around 45 he decided to enrol at TAFE but after 3 years he felt time was against him and decided to leave. It has never deterred him from tackling anything. “I’ll give it a go” was his motto and he has been successful in everything he has done in his life. Rhonda was born in Thebarton, South Australia into a musical family. Her father was a Country and Western singer and Rhonda grew up around the sounds of yodelling throughout the house. After singing in local hotels and clubs for a few years Peter and Rhonda bought the property at Mount Compass and in February 2004 started The Pryers On The Fleurieu.

They have created something unique, catering for the retired person or anyone from 1-105 and beyond to come and enjoy great music from the 20’s – 70’s in a pleasant farm atmosphere, where people are made to feel part of the extended family.

Over 35,000 people have enjoyed ‘The Pryers On The Fleurieu’ and Peter and Rhonda have just released their 3rd CD.

When I did the show with them, it was about a 15 minute drive from my house to the Pryers, through some truly delightful country. Their farm was situated at the top of the Willunga Hill, as seen in the world famous Tour Down Under bicycle race. (Willunga Hill is where the King of the Mountain stage of the race is held.) Driving home was even better. At the top of the hill and for most of the way down there’s a full 180 degree view with the sea off to the left, and roving countryside basically as far as the eyes can see to the right. All this and I was usually home by 1.00 pm.

With the shows at The Pryers, and my singing/playing with my new Band ‘Long Lunch’, I was enjoying two decent singing spots each week. I’m sure it kept me young, I certainly didn’t feel 68!!

Up until 2013, the show was presented at The Pryers farm, depicted in these photo’s. The show continues to this day at The Alma Hotel in Willunga.

The Pryers invite you on a trip down memory lane when you visit their air- conditioned/heated theatre in a rural setting surrounded by lovely gardens.

The moment you step off the bus or step out from your car you will be treated to the sound of great music from the ’20s to the ’70s and can expect to see a few surprise artists along the way.

Be prepared for non-stop entertainment in a truly professional show which involves the audience much of the time. The show finishes with a great ‘sing-a-long’ of old favourites.

Join Rhonda and Peter on their picturesque 5 acre property, located in the beautiful Fleurieu Peninsula between McLaren Vale and Mount Compass.

Mount Compass is where the world famous ‘Compass Cup’ is run, Australia’s only cow race, held at the end of January every year.

Relax and take in the atmosphere of true country splendour.

Starting time is 10.30 am with morning tea, followed by their Cabaret Show. Most areas are undercover, so they can operate all year round. Your stay will be approximately 2 hours (3 if having lunch), and they can take up to a maximum of 50 people. Individuals are most welcome, you don’t have to be part of a bus tour, and arrangements can also be made for smaller groups.

Morning tea is home made cakes and biscuits and diabetics are not forgotten either, and nor are those who require gluten free foods. Their barbeque meats are supplied by their local country butcher, and they also cater for vegetarians. All salads are home made fresh each day.

Locally made handicrafts are available for purchase.

Toilets are available, (including facilities for disabled persons).

Ample car parking and plenty of room for bus charters – only 55 kms south from Adelaide.

I’m Gonna Knock On Your Door

In November 2013 Rhonda and Peter announced they had decided to go travelling in this great land doing shows.

I was with them from the start of 2010 till November of 2013 and I enjoyed each and every show.