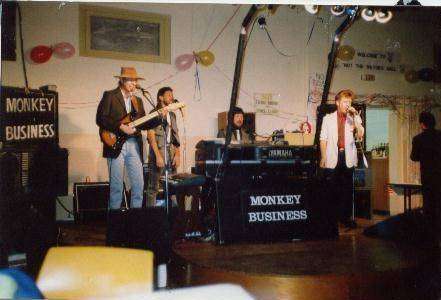 Australia – wow what a place!!!! I think it’s fabulous. I love it. Take a look at the pics of the local beaches and you will too.

We, (myself, my then wife and four kids), arrived in South Australia in 1979.

After living here for a couple of weeks I walked into the local music shop, Southern Music, and introduced myself to the owner, Norm Maiden. Norm was a saxophone player originally from Eastbourne in the U.K., and he put me in touch with George Mee, a good organ player who sadly is no longer with us. George and I rehearsed and I found him easy to work with. We got a job together playing two nights a week at The Unley Palace, a very large 300 seater Chinese restaurant. George played organ while I compered, sang and played drums. George and I worked there for about 18 months, until he retired.

But before George retired he introduced me to a pianist called Merryl James, a fabulous piano player. Merryl and I had a couple of plays together then scored a gig at another Chinese restaurant, The Empress Gourmet, calling ourselves Midnight Connection. I must admit I had a few concerns about working with just piano and drums, concerned there would be a huge gap without a Bass. Concerns totally unfounded… Merryl integrated the bass line as she played, and boy could she play!! Chinese restaurants were obviously popular in Australia, they certainly were with musicians.

There was a young and very shy guy who used to come in and watch us play at The Empress Gourmet.

One day he approached us and asked if it would be OK if he brought his saxophone along and sit in with us. He did, and this wonderful musician, Brett Spillsbury, joined us there and then!

I remember watching Brett’s reaction whilst I played him The Beatles ‘Sgt. Peppers Lonely Hearts Club Band’ for the first time. He was totally blown away!!

It was great to see his progress and being able to support him, as we were his first band. He was a natural. Please have a listen to the track called ‘Rise’ by Midnight Connection, I think it shows he played way beyond his years. It is not surprising to me at all that Brett went on to play for most of the big musicals that came to Australia. Merryl and Brett were exceptional players and I enjoyed working with them both very much indeed.

After about a year or so Merryl was offered a spot at a night club in Adelaide, an offer too good to turn down, so reluctantly we split.

In late 1981 I was invited to put some vocals down with a bass player called Andrew Hilton. Andrew turned out to be a long term friend and we ended up playing together for years and years and years.

Andrew, on bass and vocals, and myself on drums and vocals, originally started playing as a three piece, with either a pick-up guitarist or keyboard player, around 1983, continuing on as Midnight Connection. Here’s a little story of one of the things that happened on a gig we did on the River Murray paddle steamer, The River Murray Queen.

Andrew and I gigged through agents for a few years then, one night on the way back from a gig, after a succession of keyboard and guitar players that just weren’t what we wanted, Andrew said to me “I have a suggestion, radical I know, but what do you think of this”? He then suggested that I give up playing drums and go upfront as lead singer and that he would swap from playing bass to guitar and that we would use a drum machine. Radical it was and I said yes!!

I must point out to you at this time that to swap playing from bass to guitar is a biggie!!!

Andrew taught himself how to play guitar, both rhythm and lead, and must be highly commended for doing so, at the same time electronic technology was rapidly being introduced to the music scene, and he was grappling with that too. In fact, Andrew turned out to be pretty good at getting his head around this modern technological stuff, not only was he programming the drum machine, he expanded the ‘on stage’ presence by introducing a synthesiser, which gave us not only a bass but access to all sorts of sounds, brass and strings and woodwind, which he used to great effect. Have a listen to ‘Love Hurts’, I think it’s a fine example of his arranging and engineering skills. We also changed our name to Monkey Business, taking our name from the Chuck Berry classic ‘Too Much Monkey Business’.

About a year later we took on a piano player by the name of Rob Ryan. Rob played an electric grand piano and rhythm guitar as well as singing back up on a few songs. You know every band should have a Rob! He turned out to be our ‘Renaissance’ man, and could, (and did), turn his hand to almost anything. He could fix engines, build electronic ‘gizmo’s’ and ‘gadgets’, make all sorts of things like speaker boxes, or stage props, all conceived and built in no time at all. And on top of ALL that he is a most pleasant individual and a heck of a raconteur! Yep, every band should have one…

A couple of years later another guy – a famous guy here in Adelaide – who played rhythm guitar and had an excellent high end voice, joined us. His name was Neil Andrews, known locally as ‘The Adelaide Guitar Doctor’, and we sang great harmonies together. Sadly Neil passed away in August 2010.

Monkey Business gigged for around 10 years and played all sorts of shows around the Adelaide environs and beyond.

I remember we played at an opal mining town right up the north of South Australia called Coober Pedy.

It’s an intriguing town, a place where the good folks actually live underground, and we were invited to see one of the ‘houses’! It was quite incredible, it seems when you wanted another room in your house, you literally get out your chisel and your pick and hack away until you have the desired size of room you want. I remember the temperature in the house was fabulous. The walls, floor and ceiling etc., were all a cream colour, made of a chalky sort of material.

The ‘room’ looked as if someone had dipped a four inch paintbrush into a red rust coloured paint, then flicked the brush splashing the paint over the walls, ceilings and floors. It was an amazing sight.

In Coober Pedy, the only way you would know that there was a house underground is by looking for a mound of extracted material outside. So right across the landscape all you are able to see are a series of very large mounds. It was also a very dangerous place after dark, as there were ‘open mines’ everywhere too.

It was a great place. We played at The Opal Inn, the local pub, on the first night. We set up in the afternoon and then returned to start playing at 8.00pm. Problem was, there was no one in the room when we were about to play. The guy behind the bar said start playing, do about half an hour, then take a break and when you come back the room will be full… If they like you. They’re all in the other bar right now waiting for you to start. We did exactly that and he was dead right, when we came back the second time the room was full with what turned out to be a most enthusiastic audience!! I thought it was weird though, playing to an empty room.

The next night we played at the world’s first Five ***** underground hotel ‘The Desert Cave’. We were told that there were over 40 different nationalities all living together in the town, a town which by the way, still has ‘tie up rails’ for horses right along their main street, and I remember thinking it was just like a cowboy movie! The entire visit was fascinating, from the 8 hour journey each way, to the underground experience, and playing to so many nationalities in one place, all of them digging our brand of rock ‘n’ roll.

One of the things that Monkey Business would do regularly was to play at local Markets on Sunday afternoons. These gigs used to produce a decent body of further gigs. We also did lots of shows for our local council, such as ‘The Bicentennial Bonfire’, ‘Not The Mayor’s Ball’, ‘Music In The Plaza’ and many many more.

In 1994 we did the ‘Noarlunga Festival’, which is where Mos and I met for the first time.

Mos, a founder member of the Noarlunga Theatre Company, was the Artistic Director of their inaugural production, a series of three One-Act Plays, called ‘All Is Not What It Appears To Be’, presented in ‘Cabaret’ style, in conjunction with Monkey Business. We performed the shows, which were completely sold out, and Mos and I have been together ever since.

Here’s one of the songs we did for the production Gotta Go Now:

You can visit the theatre company at the following link for information on their latest productions:

The Australia Day Concert was always one of the biggest events held on the foreshore on Australia Day each year. We did the Australia day concerts in 1988, 1989 and 1990, all great to be a part of as the show always came to an end with a brilliant firework display set off from the cliff top right across the beach. Set to music, the fireworks were always really spectacular, fabulous for all the family…

We played for two consecutive years at the Royal Adelaide Show, in 1990 and 1991. They were great gigs, two sets of 45 minutes per day for nine straight days.

The annual Royal Adelaide Show attracted more than 400,000 people each year in the 1990s, and as Adelaide has grown, this event has grown with it! All I know is we played in front of a lot of people, and had a great time too.

I remember Andrew had written a song about Louis Armstrong called ‘Brother Louie’, and Rob came up with an idea to go with it. He built a life sized coffin and inside he fitted like a metal piece that would unfold when the coffin lid was opened. He then got a build it yourself full size human skeleton, put it all together and fibre glassed it. He attached the skeleton to the metal piece, then ran two wires through the end of the coffin that was nearest to his piano he then attached the wires to his shoes!!!

Stay with me now…

At the appropriate time in the song, I would approach the coffin and knock on it, then Rob would pull the string on his foot that released the lid on the coffin. The lid would open, the metal thing literally sprung into life, lifting the skeleton to a stand up position it reached up about nine feet!! Once again, at the appropriate time, Rob would pull the second string which would cause the skeleton to lift one arm with a handkerchief in it’s hand and wipe it’s skeletal brow. It was really very good. That’s just an example of the sorts of things Rob was capable of doing…

Monkey Business was a good time Rock ‘n Roll band, with excellent crowd appeal and a pleasure to perform with.