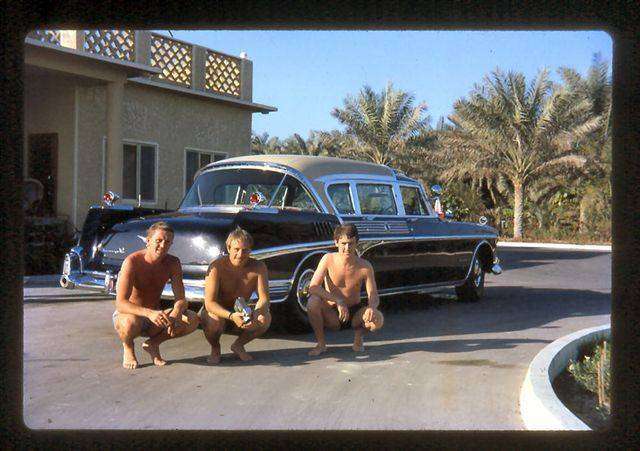 You know by the time the Blackpool Summer Season was over we were ready for a holiday!!! And we got one… Another CSE Tour, this time to Aden and Bahrain, in the Persian Gulf. A Busy year 1965!

This show was called ‘High Time’. Don Munday was compere, and was once Mr. Pastry’s sidekick and, from what I remember, a funny man. I also remember we were blessed with two very glamorous ladies on the tour, one a six foot tall magician called Suzanne, who did coin, card and rope tricks, dressed in an assortment of very bright leotards! (The highlight of her act was when she stuck a dozen or so knives into the head of an un-primed member of her audience. Then she would show everybody that the knives were still present and accounted for, in their box, but with the head of the unsuspecting audience member completely vanished!!! She never revealed to us how she did it, though she threatened to make us disappear on more than one occasion!!)

The other lady was a fabulous cabaret performer, very glamorous with it, by the name of Lee Leslie, who had some excellent song arrangements! I have to tell you she worked me pretty hard because she was an explosive artist and you just had to stay with her! Very disciplined!!

The star of ‘High Time’ was Michael Cox who had a top three hit with a song called ‘Angela Jones’. It goes like this Do ‘n do do, do ‘n do de do, do ‘n do do, Angela Jones… Remember it now? Mike was also very big in Sweden, touring successfully with chart hits in that country. But out there, in the Arabian desert, he killed ‘em… At one of the gigs we did, Mike was singing the song ‘Ah Ha, Oh No, Don’t Let The Rain Come Down’, which was a regular song in his act designed to encourage audience participation, by getting them to sing the ‘Ah Ha’ part.

Well on this particular show, which was somewhere smack bang in that desert, the soldiers had erected a stage and created a ‘room’ under the stars, which was magical! But soon we became aware of a ‘noise’, sort of hovering above the show, so eventually we turned the music lower and lower, until we could identify it. You’ll never guess what the ‘noise’ turned out to be… Right at the back of the ‘room’ all the local Arabs had come out to have a look and, in fact, were actually responding to Mike’s song but they weren’t singing ‘Ah Ha’ they were just humming VERY LOUDLY!!! I also remember that my spare snare drum skin went missing and was found as part of a roof on an Arab’s house in this small shanty town next to the camp in the desert!!

We first arrived in Aden apparently twenty four hours earlier than we should have done, and it caused a bit of a panic. An extra night had to be booked at the hotel, transport had to be arranged to take us to the hotel, there were about a dozen of us, so we just had to wait around in the heat. We had left England earlier that day, a cold and snowy November day, arriving in the heat of Aden about 2.00 a.m. local time. Heat? What was that? At 2.00 in the morning? Are you kidding?? I can’t remember how hot it was, but it was strange for us to feel the heat at that time of the day, to say the least, and to see soldiers working in shorts! Shorts?? Somebody should have told ‘em it was November!!

After a couple of hours of being entertained or looked after we were certainly relaxed! You see, one of the things about these CSE tours was that as you go from each camp and visit, and do shows, each ‘Mess’ wants to give you the best possible time. And, of course, that’s the one you are going to remember long after you’ve gone home. So we got the best possible ‘piss ups’ you can imagine, plus the best eats etc. in every single place we went to.

Now most of these places would be lucky to have ‘live’ entertainment a couple of times a year, and, after you’ve been on one of these tours a couple of weeks it becomes hard to know really where you are. It seemed to me at the time that wherever they were, they pretty much knew how to party!!!

We had our own assigned soldiers who looked after us, who did all the carrying, the setting up and down, and somehow managed to keep everyone going!! At some point someone said the transport was ready to take us to the hotel, so we went outside and saw a single decker army khaki bus, with iron mesh all along both sides covering all the windows and the back and the roof! Four, yes four, soldiers armed with sub-machine guns jumped into the bus first, one at the front next to the driver, two in the middle of the bus, one on each side with their guns poking out of a tiny opening in the windows, and a fourth guy at the back of the bus, scary eh? But wait there’s more… as our gear is being loaded onto the bus, we also became aware of two single armoured ‘Champs’ vehicles, with what looked like small canons mounted on board. There was one of the vehicles at the front of the bus and another at the rear!!

Obviously, we thought, the hotel we were staying in must have been many miles into enemy territory!! But no, we were told, it’s actually no more than about three miles. But you see, us guys were there to keep up the moral of the British troops, and if they could get one of us guys, we were told, it would make a terrific dent in the British morale. So as long as we were there, we were considered to be prime targets!!! That was nice to know!! They might have mentioned that before we got there… What do you think???

We flew in all sorts of planes, to all sorts of strange out of the way places, I remember a place called Rhian, I think, which was just a supply refuelling dump, and had probably no more than 60 people stationed there.

They were posted there for 12 months at a time. I can also remember sitting out all night, literally on the desert floor, watching what the soldiers said were camel spiders crawling about. Apparently they only emerge after dark and these things are ‘huge’ folks. I’m talking dinner plate size bodies!!!

Every now and again the night silence was broken with the sound of revving engines as two tractors raced around the compound – most likely as a result of a challenge to ‘I can go faster than you’. You know men and beer, it’s always been the same!!

We met the Sheik of Oman and this guy was rich!!! He used to give away Omega watches to visiting dignitaries, and on the watch face where the famous Omega sign was, there was a picture of himself right in the hoop part of the logo!!! This guy also used to have magnificent ‘Falcons’ and a whole fleet of Cadillac’s and Rolls Royce’s just to ferry the birds around!!

This is a Pic of Dave, Don and Des in front of one of those vehicles outside the Sheik’s Beach House. He also used to have elephant races, and that’s a strange sight I can tell you! The Sheik had his own private beach, and we were lucky enough to be invited to use it.

When the Sheik appeared, all his servants would be in front of him, walking backwards and brushing the sand away and laying a red carpet.

AND perhaps the strangest of all, for some reason, the Sheik adored Mike Sarne’s version of ‘Come Outside’. He had the record playing constantly over the loud speakers which were hung along his private beach.

When we were in Aden itself, we stayed at ‘The Rock Hotel’, a very swish hotel with a nightclub on the top floor. We were there most nights after the shows, and one time I went up to the roof to have a smoke and look at the stars and, with little street light glare to affect the view, it was magnificent. There I was, digging the stars when the silence was broken with a rather loud ‘Psst. Psst’. I looked across to where the noise had come from and peering around a brick corner, presumably some kind of a chimney, was a local. ‘Hey’, he said, ‘You and Me, Jig-a-Jig?’. Now folks I don’t speak Arabic but somehow I understood what he meant, and even managed to answer him back in the local lingo. ‘Eff off’, I said… I think that’s Arabic?? In the circumstances it was close enough for me!!! And even with all that ‘danger’ and the occasional ‘misunderstandings’, it was a treat folks, to be able to travel and play music at that time!

Yes, 1965 was a great and interesting year indeed…