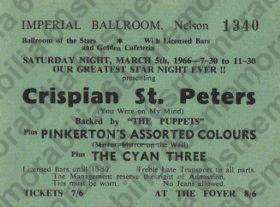 Back home to Preston for Xmas and then in January 1966 we were introduced to Crispian St. Peters. We were advised by the George Cooper Organisation that Crispian had entered the New Musical Express national charts at No. 21 and that ‘he was starting to work next weekend’, (22nd. Jan), and it had been arranged for us to become his backing group and we were to rehearse with him on the 20th and 21st. Wow!! Two day’s for rehearsals… TWO DAYS!!!! By the time we did the first gig with him on Jan 22nd he was already TOP TEN!! Then, only 11 days after meeting Crispian we found ourselves playing with him LIVE on the BBC’s ‘Saturday Club’ with Brian Matthew, on January 31st. His first hit was ‘You Were On My Mind’ which got to No. 2, and he followed that up with ‘Pied Piper’ which went to No. 1!!! Wow!!

There we were, backing someone who had TWO TOP FIVE HITS!!!

What followed during the next six months was a roller coaster ride of live concerts, radio appearances, constant touring… And of course, fans everywhere!!! We worked all over the country on some fabulous shows during our time with Crispian, with people like The Small Faces, Lou Christie, The Walker Brothers, The Australian Seekers, and The Spencer Davies Group. Great memories and great fun!

Crispian was a really good songwriter, and had some great songs on his album ‘Follow me’. He was also the only artist whom we had backed regularly who had two top five records charting while we were on tour!!! Not one, but two hits… And we were part of all that folks. It was magical!

Moving on to Great Yarmouth towards the end of May, I’m celebrating my 22nd birthday, AND in rehearsals for ‘The Big Star Show of 1966’ which was to run for the summer season in this fabulous town. The bill was Gerry & the Pacemakers, The Karl Denver Trio, The Silkie, The Marionettes, Mack and Kirk, Mike Burton, The Puppets, and, of course, The 8 Starlets.

There were ‘show business’ people everywhere in Great Yarmouth that year, a happening town indeed! Besides Gerry and the Pacemakers, The Karl Denver Trio, The Puppets et al, at The Royal Aquarium Theatre. There was Terry Scott & Hugh Lloyd, Donald Peers, and The Dallas Boys at The Wellington Pier. Dickie Henderson, Hope & Keen, and Pearl Carr & Teddy Johnson at The Britannia Theatre, and Frank Ifield, Ted Rogers and The Baron Knights at the ABC. A few ‘biggies’ there for the time!

It was also the year that England won the Soccer World Cup. We found a fabulous place to stay for the season in Bradwell Village, called St. Nicholas House, a large Manor House with a lounge/bar on the ground floor and the rest of the building converted into holiday flats. The house itself was set at the back of a large field and was surrounded by self contained, detached brick holiday accommodation built that year. So there we all were, the first ‘residents’, and being so we were bestowed the honour of ‘naming rights’. The Puppets rented two of these buildings, but I can only remember the one I was in. We called that one ‘Puppet Place’.

I can also remember Mike Burton had one, and so did Karl Denver and Les Chadwick, the bass player from The Pacemakers. The Silkie, and some of the dancers had one as well. It was just fabulous!

In the bar there was one of those wrist football machines you know, the ones where you grab the handles on the outside and turn them to make the footballers move. Well in no time at all we had set up League Tables, Cup Matches, Teams… Remember it’s 1966 and Soccer was big news.

It was also a great novelty for us to be mixing with the holidaymakers at ‘St. Nick’s’ as we all affectionately called it. I can also recall a ‘Come and meet the Stars’ day to raise funds for Charity, which was held at the ‘Pleasure Beach’. Most of the stars from all the shows turned up and what a fantastic day it was, ‘meeting and greeting’ the holiday folk and taking rides with them. It was definitely time to let our hair down, and we did!!!

But Great Yarmouth wasn’t all fun and games… We had to work really hard as well. Besides doing two shows a night from Mondays to Saturdays, in ‘The Big Star Show of 1966’, being the ‘house band’, having our own spot on stage, and backing or augmenting The Marionettes, Gerry and the Pacemakers, Mack & Kirk and, of course, The 8 Starlets…

We also did the ‘Sunday Concert Specials’, again twice a night as the ‘house-band’, backing Crispian St. Peters for these shows, as well as having our own spot on stage. At least the Sunday gigs were in the same venue so we didn’t have to move the gear!!

Headlining the Sunday shows was Billy Fury. We had met Billy a few times before, appearing on various shows around the country with him, but had never backed him, or gotten to know him well. However, the Summer Season at Great Yarmouth ran for many weeks and over that time we got to know him a lot better. It wasn’t too long before Billy came out to ‘St. Nick’s’, which you can imagine caused a bit of a stir with the resident holiday makers who were used to us lot by this time.

Billy was a ‘Star’ at the football game too!!!

We had also met and got on well with Larry Parnes, a man who had a big influence on Billy’s career and was also one of the major backers of the show.

At the end of the season Larry and Billy approached us and invited us to become Billy’s backing band, (Be Billy’s Band!!! YES PLEASE!!!), and that was great because throughout the season they had seen us playing many many times, so to be asked was a tremendous compliment.