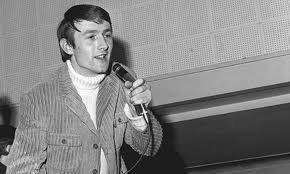 How’s this for a ‘bums on seats‘ tour? The Walker Brothers, Spencer Davis Group and Crispian St. Peters, all riding high in the charts at the time. Just fabulous…

Now personally, I am a Walker Brothers fan, so imagine my delight at scoring this gig!! In later years I included two Walker Brothers songs, ‘Make It Easy On Yourself’ and ‘The Sun Ain’t Gonna Shine Anymore’ in my own act many times. But you know, for all the dates we did with them on this tour, we never even got to meet them personally. They did the whole ‘Star’ trip thing, travelling separately from everyone else, and staying in different hotels to everyone else. They ate separately, all that sort of stuff, and basically they did not speak or interact with anyone on the tour. How sad is that?

On stage however as we eagerly watched them perform nightly from the wings, we could see how they captivated the crowd right there. They were very good, very good indeed!! It was good to see folks.

Spencer Davis was absolutely brilliant, with Stevie Winwood on vocals. Stevie’s got an excellent voice and thoroughly deserves the success he has had. Didn’t matter how many times you saw him, you were always aware of the quality in the voice department.

Crispian St. Peters was also flying high at this time, and we, The Puppets, were his backing group, I remember one really funny thing happening while we were on this tour and it involved Miffy. As stated earlier, Miff is a Preston Legend who went on to success with his own band David John and The Mood.

But at this time he was working as a ‘Roadie’ for us on the Crispian St. Peters shows. One of the gigs on this tour was at the Liverpool Empire…

Let me set this up for you… The stage door to the Liverpool Empire was in a side street, and as we arrived in our gig van, early in the afternoon, there were seriously somewhere between 200-300 kids just waiting to pounce!! The Puppets had backed lots of different artists and were quite used to these sorts of crowds, and we knew how fickle the fans could be. We also knew that as soon as they realised we were not ‘stars’ they would leave us alone.

New to this kind of thing was Crispian, enjoying his first hit, feeling invincible. We had him hidden, down on the floor of the van, with strict instructions to LIE LOW!! Whatever possessed him to do what he did next I’ll never know, but for some reason he got up from the floor of the van and started to wave to the kids. ‘No Pete’, we tried to tell him, ‘that’s not a good idea’. Next thing we knew there was a huge shout, then a scream went up, ”It’s Crispian! It’s Crispian!”,
and the kids converged on the van with some very frightened Puppets inside saying things like “Oh Pete, we do wish you hadn’t done that!!”, in our broadest Lancashire accents!!!

Now times like this call for quick thinking and we had a ‘Miffy’ who always looked more like a pop star than any of us did. So just as the kids reached the sliding door on the side of the van, we opened it and pushed Miffy out!!! Poor Miff!!! The kids took one look at him and decided right there and then that he must have been a ‘somebody’, and sort of went ‘Ooh look, a pop star’, and proceeded to rip him to pieces!!

The crowd actually tore the sliding door clean off the van too! But the diversion allowed us to drive around the corner and enter the theatre through a different doorway! Miffy didn’t forgive us for a long time after us doing that to him!!!

Now whilst all this is happening you can imagine the expression on Crispian’s face, Absolute fear, and rightly so! (It WAS all his doing!!!) He promised he would never do anything like that ever again and he never did!! We also backed Crispian St. Peters at the VERY famous Cavern Club in Liverpool and, as I recall, we were augmented with the talents of Jimmy Page, Albert Lee and Vic Flick!!! Well, weren’t we lucky!! All guitar players of note.

In regards to the other Show it was a Midnight Matinee. The bill??

On this show we were backing Jess Conrad. Here’s his set list in his own hand:

Just thinking about backing people, let me share this with you…

We were booked to back the British guitarist Bert Weedon. At the time Bert was having great success with a TV show called ‘The Tuesday Roundabout’, which also featured two puppet characters, one called ‘Ollie Beak’ and the other ‘Fred Barker’.

The gig was in Brighton, on the south coast of England, and when we got to the venue we noticed an unusual number of children about the place. It turned out that all the advertising posters for the gig had ‘Come and see Bert Weedon and HIS puppets’ on them and everyone thought that Bert was performing with the puppets from the TV show. We only ever did that one job with Bert!!!