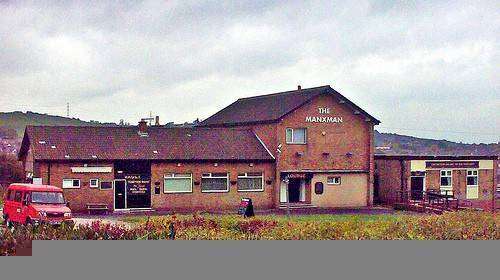 We decided to do the gig, at The Vic Club, as a trio with Don on Organ, Jim on Bass and myself on drums.

The most memorable thing about this gig happened one night when the ‘booked’ artist was the late Long John Baldry, who I’m sure everybody knows was extremely tall. He was in fact 6 foot 7 inches or just over two metres. He was certainly long!!

John arrived wearing a large tall fur hat a-la Russian style, on the top of his head – a full length, long haired, black fur coat, right down to his ankles, and wait for it… Cuban heeled boots. He looked about 30 feet tall!! Well, the last house before the music starts is always a Big Jackpot game, and is taken incredibly seriously by the good folk in Clayton Le Moors.

So the game is on, the numbers are being called, absolute silence reigns – enter Mr Baldry – He strode straight in, walked right down the middle of the room with very heavy footsteps, he realised what was happening and said in his deep booming voice…

The poor lad ended up playing to about ten people that night. There’s a moral there folks “When up north don’t take the mickey out of Bingo”.

We didn’t stay in Clayton Le Moors long, Don was offered a spot playing with a dance band six nights a week, so we split and went our separate ways. It was now about mid-1967.

Don went on to play with Stax Of Soul and The Soul Review for over 25 years.

Jim went on to play with Just Four.

I rejoined Bob Johnson and the Bobcats, line up was Bob vocals, Dave Millen guitar, Daz Smith Bass and myself on drums. Fortunately for me, it turned out to be an excellent line up.

I recall we used to perform a Mose Alison song called ‘Parchment Farm’ which developed from a two and a half minute tune into one single tune that lasted the whole set, with all three of us taking long individual solos. It was a highlight for a while and the patrons loved it. Sadly with illness at home I had to leave and Fred Kelly (another good Preston drummer) took my place.

When things got back on an even keel I was looking for work and somebody told me there was a gig going at a place where I knew the guy who owned it, so I rang him. He told me that he particularly wanted this Singer/Compere from Blackburn, and that the singer wanted to bring his own drummer, and that he had given them the job. It didn’t take long to work out that where ever these two guys were currently working they would be leaving there soon, and that their spot would be available. So I found out where they were working and rang the place just after closing time, hoping to speak with the landlord.

A male voice answered, and I asked for the landlord, he asked me what I wanted – I explained – then he told me that he in fact was the Singer/Compere and that the landlord there was also the organ player, and furthermore they hadn’t yet told him they were leaving. He said they were working there the following evening and they were going to tell him then at the end of the gig. Basically ring back then!!

As jobs didn’t take too long to fill in those days, I rang back in about an hour, and this time I spoke to the landlord a Mr Owen Walls and explained the situation. He said – can you come in tomorrow night, we’re doing a show. We don’t know each other – see what you think. If you think you can do the job, introduce yourself, if not go home. I went along the following night to a pub called The Horden Rake in Blackburn. The pub held about 120 in the room, it was full and the vibe was good. In the centre of the back wall in the room was a raised stage which had an organ and a drum kit on it.

Enter Owen Walls, the landlord/organist and the drummer. They played a bouncy hello/welcome type tune and introduced the Singer/Compere… Ray Scholey (I think that’s how it’s spelt), who comes onto the stage looking quite magnificent. Ray was a tall man and wore a medium blue shiny silk suit with a white shirt and a black bow tie. He took the microphone, chatted with the crowd, told humorous tales and one or two jokes for about 15 minutes. He then announced a Tom Jones number and sang it every bit as good as Tom.

I thought Whaaaaat???? Can I do that? Of course I can, hey I’ve already done the drumming and the singing part, how hard can it be chatting and telling jokes… I took the job playing four nights a week… To be honest, in hindsight, it was very hard indeed.

I emptied the pub on the first weekend I took over – but I worked hard and got better at it. I stayed with Owen for the next 6 years, playing four nights a week at the three different venues where he was the landlord.

Each night we would back a different artist, so over that whole period I’m sure we would have played for more than 1,000 different acts, at least half of all artists doing the circuit at the time. A fabulous experience which not only helped me to work on, and improve, my compering skills, but in fact during the last few years with Owen I was also easily able to do anything up to an hour of stand up comedy.

Owen was an excellent organist a most capable player of most styles, and we had a big sound for a duo. Eventually, around 1976, Owen decided to give up being a landlord and to move into the bottle shop business. We started playing 3 nights a week at The British Legion club in Slough, Buckinghamshire which again involved being the house band and backing the ‘booked’ artist. We stayed for about a year. Then we commenced an interesting gig. We were doing three nights a week playing for and presenting The Watney Roadshow around the Southern Counties, a show totally devoted to promoting Watneys Beers.

It was a good gig, well paid as I recall, and of course free beer!! We had a couple of comics on the show Amos and Andy – very funny guys indeed – not only jokes but sketches as well, all excellent entertainment.

Then, suddenly, Owen was taken ill and had to give playing away. I did work with another organ player for a while, but, in 1979, I decided to take the family (by now wife and four kids) and emigrate to South Australia.