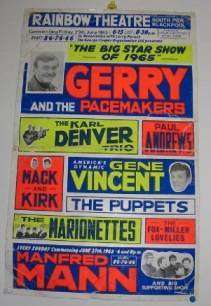 The CSE tour of Cyprus, North Africa and Malta was just the best!! The show was called ‘No Strings’ and it featured a juggler by the name of Christine Martell. Now seriously folks, whenever I hear the strains of ‘Teddy Bears Picnic’, ever since that show, I fall about laughing!! You see, Christine used to like a couple of glasses before she went on, (not a good thing to do when you’re a juggler!! We were really thankful she wasn’t a knife throwing act!!!), and she used to well, ‘drop ‘em’, if you see what I mean, and we would start, and restart, ‘Teddy Bears Picnic’ literally dozens of times as poor Christine, in her thick Irish brogue, would chastise herself for dropping her props!!

But I’ve got to tell you she was a good sort and we had a lot of fun!! The Compere was Wyn Calvin, the Welsh Prince of Laughter, now MBE. He was also acting as a correspondent for the BBC and I can remember one day going out to help him. He got me to climb up, and sit in, a tree with him, while watching the ‘Eoka Day Parade’. Wyn was making a recording for the BBC and I had the microphone protruding out of the cuff of my shirt, with the wire going back down my arm, as I leaned against a branch with my hand positioned close to Wyn’s mouth, so as he could speak into it. This subterfuge was necessary, he said, because if we were caught we could get into a lot of trouble!!! Good bloke was Wyn!!

Another act on the show was ‘Kim and Erik Prince’. Erik had major success later when he won many heats on ‘Opportunity Knocks’ as the one armed ‘Student Prince’ light opera singer. Again, good people and a lot of fun!!

Vince Eager was ‘top of the bill’ on this show. I first met Vince in around 1963, and he and I have remained friends ever since. Back to Cyprus…

We stayed at a fabulous hotel the ‘King George Hotel’, right on the beach in Famagusta Bay. It was here we were first introduced to waterskiing. I found it to be extremely exhilarating! You put the skis on, then get pulled by a speedboat and you’re up!!! It felt FANTASTIC!!

Vince was watching us having a great time, and he decided to have a go himself. Now it must be said right here, that our Vince is a big lad… about 6’ 14” in the old money!! So there he was, skis on, and telling the boat operator he was ready. Then the boat took off, or rather tried to… Vince started to come up out of the water and as the little speedboat tried and tried [I think I can I know I can!!!] to lift him, it’s front (or bow) came right out of the water and Vince just slowly sunk!!!

Quite a sight!!! A larger boat had to be brought out before Vince could enjoy water skiing… It was very funny at the time. It’s amazing to think that much later Vince did many years as a Cruise Director on boats!!! Vince is still performing.

Vince played at the ‘Fury Fest ‘03’ with his band, Rokola. I urge you to catch this man, and his band, if you can. Top bloke and great performer, our Vince!! Glad to know him.

We went across the top of North Africa, playing in Benghazi, Tripoli and a place called R.A.F. El Adem. We then went on to Malta, where it was very nice to catch up with my sister June and her husband Bob, who was stationed there. (Bob was a musician in the Royal Marine Band.) They had arranged a surprise 21st birthday party for me, which I certainly did not know about. I walked into this room and everybody shouted ‘Surprise’ and ‘Happy Birthday’. It was just great! I also remember having 6 shirts made in Malta. Somehow all six were made in 24 hours!!! Great shirts, lasted for ages.

Incidentally, do you know how to make a Maltese cross? Stand on his foot!!!

While we were on this tour, the Combined Services Entertainment director, Major Derek Agutter, and his wife Kit, had a party for us all at their home. At some stage during the evening Derek took the floor and pointed to the top of the stairs, where his daughter stood. She was about 11 years old at the time. “Ladies and Gentlemen” he said “I would like to introduce our daughter to you all, she is going to be a film star!” We then said hello to his now very famous film star daughter, Jenny Agutter.

On to Blackpool to the South Pier for the Summer Season! Now for all the folks that don’t know, ‘Summer Season’ work in the UK was highly sought after in the ‘60s. If you could score a Summer Season then it was great because they usually ran two shows a night, 7 days a week, and because it was all at the same venue, there was no carrying or transporting of your gear. Summer Seasons usually ran for 16-20 weeks, so just for a while you can ‘park’ for a few months and not live out of a suitcase!!!

Blackpool, the ’Las Vegas’ of the North of England! How’s this for holiday entertainment choices… (Remember, this was 1965!!)

At the North Pier there was Tommy Trinder, Edmund Hockeridge, Billy J Kramer and Tony Holland, (he was that guy who used to flex his muscles in time with the music, he usually used a Cha Cha like “Wheels”, remember?).

The Puppets on stage with Gene Vincent at The Rainbow Theatre South Pier Blackpool. Summer season 1965.

When we were with Gene Vincent in Germany he asked us if we would like to share a house together for the season when we got to Blackpool. He also said that he would pay the first ten pounds of the weekly rent, provided that he could have a room of his own!! Nice one Gene. We ended up getting a very swank, large multi bedroomed property, on the North Shore, and it cost only twelve pounds per week, all up!!

What a good story, I sent for the book it’s a good read thanks James!

Blackpool was always busy in the summer and we used to take the tram which ran along right next to the sea from North Shore down to the South Pier, about four miles every day. (It was a lot easier than trying to drive through those holiday crowds!)

Gene Vincent certainly got some strange looks as he travelled in his full leathers on the tram.

Manfred Mann, who did the Sunday concerts at the Rainbow Theatre with us, used to travel from wherever they played on the Saturday evening, arriving at all sorts of hours, and slept in the attic. Yes, we had discovered even more bedrooms in this wonderful twelve pounds a week mansion!!!

A squiz at the program for the Sunday concerts and you’ll see the name The Mark Leeman Five in the first half, I mention this because Mark was killed in a traffic accident on his way to Blackpool and he had only just done a couple of weeks of the season. He and his group were excellent. They did a top version of Nina Simone’s ‘Forbidden Fruit’ and I recall that their drummer was Brian ‘Blinky’ Davison who went on to play in The Nice.

Blackpool being quite close to Preston meant that my Mum could come to see the show. That was special because all those years ago we had gone together to the Hippodrome Theatre, in Preston, almost weekly, and now, here she was, coming to see me performing on one of those very theatre stages! A proud moment for me and I know it was for Mum because she told me so.

Mum met Gerry, Karl and Gene, and was a happy lady that night… I always thank my Mum for those times at the Hippodrome!!!