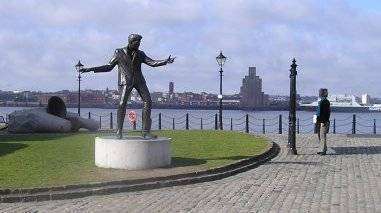 The Puppets were always comfortable in the presence of ‘Stars’. It must have been something to do with our ‘up north’ natural warmth!!! (Which is why I think we clicked with Billy ‘cos he was the same.) I liked Billy, I thought he was a good man. I always found him easy to be with, there was no edge with him. He was a funny guy with a great sense of humour and fun. He had a wide range of interests and would talk enthusiastically about everything.

I remember when he first started coming to our house regularly. At his suggestion, we invited all the near neighbours over to meet him. Billy happily chatted, had photos taken etc., and then he asked them all if they would basically lookout for him whenever he was here, and to please make sure that no-one touched his car!! The result was of course that nobody ever did touch his car. In fact, our next door neighbours got quite used to Billy, and would often see us sitting on deckchairs at the bottom of the garden, around dawn, having just returned from a gig, usually tucking into toasted bacon sandwiches… A favourite early morning munchie!!

You know folks Billy loved his cars (Ford Mustang similar to Billy’s) and he had a passion for speed. When he was living in Dorking, which was about 240 miles from Preston, and on the other side of London, he would leave our house and be home just four hours later! Man could he drive!!

Obviously I had no idea that I would be writing about this in the future. Gee honest, I would have paid more attention!! However a few things do come to mind. I remember one time, in the field at the back of our house where all the kids played, our daughter, Jan, who was about 6 or 7 at the time, had fallen and cut her forehead open on a brick. Billy raced over to her, picked her up in his arms and went with her to the doctors, insisting he stay with her ‘till he knew she was OK! Billy was certainly Jan’s hero that day!!

He was brilliant with birds, too, the feathered variety I mean, and showed his caring nature once again. I recall at one of his homes he had about seven or eight different injured birds, Falcons, Hawks etc. Hey, I’ve just had a thought… Falcons… Hawks… It’s very ’60s speak isn’t it? I wonder if there was a connection? Billy loved his birds and even carried a portable ‘Hide’ in the boot of the car in case he saw a special or a rare one, and would think nothing of stopping, putting up the hide and staying for a couple of hours hoping to take a ‘photo of the bird!! He talked of an idea to publish a book of his bird ‘photos, but I don’t think he ever did. Shame really because the ‘photos I saw were very good.

I recall wanting to buy one of those new fangled stereo systems, and Billy coming with me when I went into Preston to get it. The guy behind the counter was a guy I went to school with. I think his name was Stephen Vandenholme. He was so chuffed at meeting Billy and having him in his shop he gave me an ‘upgrade’ on the speakers at no extra charge!! Another of life’s lessons… It’s not what you know but who you know every time!!! Billy and I then bought two albums by Chicago and we listened to them non-stop for a couple of days on ‘THE Stereo’ with its EXCELLENT speakers!!! Chicago still remain one of my favourite bands to this day. (And, as an aside, those very speakers are still in use today as monitor speakers in a sound studio locally here in Aldinga Bay!)

As you can imagine, by now we, The Puppets, were well experienced in backing stars both big and small, but backing Billy was a totally different experience altogether! Billy attracted a ‘Billy’ crowd, and they were like no other crowd we ever played for. His fans would devise all sorts of ways to try to get to Billy before, and after, the shows, so many methods of getting him in and out of venues had to be invented!! Some worked, some didn’t, and we always knew when he’d been spotted – a huge cheer would erupt!!

A typical gig for us would be to arrive at the venue in the early afternoon, to set up and make sure that all the equipment worked OK.

Billy would then come along, in his own vehicle and do his ‘sound check’, (as we now call it). It was usually a couple of numbers and any new songs that were to be introduced into the act. After that, we’d all return to the hotel room to grab a bite to eat and relax for a while. We’d return to the venue about an hour before the show, and fight our way inside. Then we’d have to go to all sorts of elaborate methods to get Billy inside too!!!

The excitement would continue in the dressing room, with an ‘air’ of ‘this is great, it’s going to be a good gig’. There are people everywhere all wanting to talk to Billy, get a photograph, an autograph… It was such a buzz!!! And suddenly we’re on!!! The Puppets take to the stage to do three or four songs to warm up the crowd, as if that ever needed doing on a Billy gig !! (The crowd that Billy pulled were always avid Billy fans.)

Then as we would announce our last number before Billy would come on, the crowd would press to the front and you could feel, and almost taste, the expectancy of something wonderful about to happen. The lights would dim, I would hit the deep tom tom just about as loud as I could with a drum roll, and the crowd would breath as one.

Then the voice would say, ‘Ladies and Gentlemen ….Billy Fury!!!!’

There would be an ‘ear shattering’ scream, a scream full of approval, and of anticipation, excitement and wonder!! Billy ALWAYS had that effect on his audience. It was truly remarkable! It didn’t take long for Billy and I to work out explosive, percussive noises to compliment his hand and body gestures. He was the master of performance and every time he moved I would respond on the drums with a cymbal crash or rim shot… or both!! The crowd loved it, and so did we as we rode along on the crest of this wonderful wave of ‘Rock’n’Roll’.

I thought Billy was a great singer… He was a good ‘breather’ too and had great ‘vocal timing’. Billy could ‘rock voice’ just as easily as he could ’ballad voice’, and he always seemed to do it just right!! Billy always seemed to look just right too. He had fabulous stage clothes and was the epitome of ‘Rock’n’Roll’. Yes, it was very exciting, and an absolute privilege, to be part of that ‘wave’… I thoroughly enjoyed myself!!

Sadly, as time went by, Billy’s health began to fail him. The gigs started to slow down so we had to move on, but Billy and I remained friends. I’ve just remembered something else… I once had to get hold of Billy for something and after a couple of calls to a couple of people I was given a telephone number and was assured that even though it was 2.00am, it would be OK to call. I did, and it turned out to be Kenny Everett’s number.

Kenny answered the ‘phone himself, with his laconic Liverpool tones, saying, “Hello Southport Hospital, hot swabs delivered”. I thought it was a very funny moment at the time. Onya Kenny, you gave me many a laugh. Thank You.

And Thank You Billy Fury. You were certainly the most charismatic star that I worked with during my time with The Puppets. Your fan base surpassed all others and every single time we took to the stage with you we had an exciting, exhilarating, experience. I personally am truly amazed at the extent of that fan base which prevails today, more than 28 years after Billy’s passing. It’s just as strong as ever.

For me Billy was a remarkable performer and friend.

I clearly remember the last time I saw Billy. My then wife and I went to see him at a clinic in Harley St., London, a short time after he had had a rather large heart operation. Poor Billy, not well at all. He was cut from just below his neck right down past his waist, I remember thinking it was like the stitching on a football. Billy was never what you would call a large bodied guy and he had lost a lot of weight through this ordeal. He looked as they say in Preston, ‘proper poorly’. He was talking to us fine though, and we had a good time. I’m glad we did, because I knew, as we said our goodbyes, that I would probably never see him again. (We were in the throes of emigrating to Australia.) BUT I did get to say goodbye face to face and I’ll always be grateful for that.

We arrived in Australia in ’79 and I spoke on the ‘phone with Billy just a few times after that. Then one day I received a call from Albie, Billy’s brother, telling me that Billy had passed away.

Billy was dead and it was just awful!!

Then we received this note from Lisa, Billy’s partner…

I am in touch with Lisa and she tells me she is hopeful that there will be a film of Billy’s life at some stage. She mentioned that she thought that one of the guys from Bros would be good for the part of Billy!!

I recently received this Pic of Billy’s grave

I’ll tell you what… He was a good pop star!!! They thought so in Liverpool too, look at the statue by ‘The Mersey’…

Sadly, Lisa was attacked in her London home on the 7th June, 2005 and was beaten so badly by her attacker that she almost lost her life. Mos and I were so sorry to hear that awful news.

A large mural has gone up on the side of Tower Mansions flats on the pathway linking West End Lane and Finchley Road in West Hampstead. It was christened Billy Fury Way last year.

Among those who turned out to pay tribute to 1950s and 60s popstar Billy Fury was fellow Liverpudlian Holly Johnson, former lead singer of Frankie Goes To Hollywood, who enjoyed massive success in the 1980s. Mr Johnson, who has since become a respected painter, said: “The mural will mean the council have to do more to keep that pathway clean.“It was quite a scary road, so having that there will help to enhance the quality of life a bit. English musicians have made such a massive creative contribution to the world, but we are still so undervalued compared to sports stars.