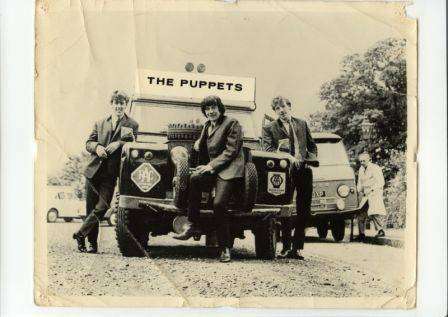 My name is Des O’Reilly and in the ’60s I was the drummer/vocalist for a beat group called ‘The Puppets’, which hailed from the town of Preston, in Lancashire, U.K. We recorded at, and were managed by, Joe Meek at RGM Sound in Holloway Rd., London. From 1962 – 1967, besides making our own records, we also backed a lot of solo artists of the day, Americans ‘Little Miss Dynamite’ Brenda Lee, the fabulous Ronettes, the ‘Mash Potato’ Lady, Miss Dee Dee Sharp and Gene Vincent the ‘Be Bop A Lula’ man. We also backed lots of UK idols including Crispian St Peters and Billy Fury with whom I remained friends with for the next twenty or so years!

These days, I live in beautiful South Australia. I got a computer in 2003 for the very first time! Now, because of my association with Billy, I looked for, and found, a Billy Fury site. I looked into the ‘Messages’ bit and read a message from a Ray Shenton who does a Billy Fury tribute show and comes from Preston and still lives there!

I sent Ray an Email to introduce myself, and it turns out that Ray was well aware of the Puppets, and of their association with Preston. He suggested that I write about my experiences.

But if I am going to write about my experiences, it probably pays to start at the very beginning. A very good place to start…

I was born on 28 May 1944, at 72 Deepdale Rd., Preston, just up from Preston North End’s football ground, to parents Elizabeth and Peter who already had four other children, Cyril, Dermot, June and Pam. As Dad was in the army, we were moved to Blackburn for a while and lived at No. 5 Sunny Bank Rd. I started my schooling from there and met two fabulous people, Mr. and Mrs. Battersby, who lived next door.

They took a liking to my sister Pam and I, and Mr. B made me my very own wooden steps so that I could reach and play billiards with him on a full size table he had in the front room. For years and years after, both Pam and I received Birthday and Xmas cards, always with money in them. They were just like what I imagine grandparents [I never met mine] to be. I remember I liked them both a lot.

Still in the army we are on the move again, this time back to Preston, to be stationed at Fulwood Barracks. Dad was a Regimental Sergeant Major and just before my 7th birthday he left the army for good and they bought a house at 144 Deepdale Rd., opposite Preston Royal Infirmary.

Two things stick out for me at this time, the local corner shop in Peel Hall St. which sold Candy Floss, Wow!! And they had a machine to make it!! The other was spending my 7th birthday in Deepdale Isolation Hospital with Scarlet Fever, a lovely lady! [Come on now readers at this point I’m only 7!]

I went to St. Ignatius primary school where I met a teacher called Tommy Tootall, who every day, usually for the last lesson, [sometimes for the last two lessons if we were lucky!], would absolutely enthral us with stories and tales, and would read books to us. He was brilliant! No-one could tell the tale of ‘The Snow Queen of the Ice’ like he could. I didn’t realise it at the time but I was having a fabulous close up demonstration of how to handle, and keep the interest of, a group of people all at once.

Another couple of things stick out for me around this time. My Mum used to take me to the Hippodrome Theatre in Preston, every week, and over a period of two or three years we would have seen a tremendous variety of acts. I remember seeing a young girl without any arms and she was doing a shooting act!! She was holding, loading and firing guns with her feet!!

It’s no wonder I’ve loved variety all my life bless you Mum, you were the BEST!

The other was passing the 11 plus exam and getting a scholarship to attend Preston Catholic College, which I did from 1955.

Now when a boy starts to attend Grammar school for the very first time, lots and lots of things begin to change. Until this point, primary school kids, my peers, have lived a life of comparative ease and innocence – naïve if you like, not at all like the street smart primary school kids of the new millennium! All of a sudden you’re introduced to a whole bunch of new stuff that you’ve never had to contend with before, like catching two or three buses to get to school – uniforms – big boys – bullies – prefects – lines 100 or 200 for ‘misdemeanours?’ The line you had to write was always the same, – Patience is a virtue to be practised and praised.

And whilst all this was going, the whole world changed!!!!!!

I distinctly remember going to Dot’s Café on North Rd., in Preston, because they had a juke box, a rarity indeed at that time. The first time I heard the intro to Little Richard’s ‘Keep A Knocking’ must have been early ’58. The drum and high hat figure just blew me away.

But my initial foray into music was as a guitar player. In 1960 a bunch of us went to Butlins Holiday Camp for a week’s holiday, and whilst there we entered the People National Talent Competition and won the heat!! The prize was a free weeks holiday and entry into the next round of the competition, We didn’t win that round, but I had a taste!! As far as I can recall the personnel was Ted Flanagan, Jimmy Lee and myself.

You know it’s great doing this exercise because it leads me to think of all sorts of remembrances, like I remember the first time I ever sang on a microphone in public. There was a TV show called ‘The Top Town Tournament’ where two towns would play off against each other – each town providing say a comic, a female singer, a male singer, a speciality act etc. They were auditioning for the show at Saul Street Baths and I went along.

I told the guy I wanted to sing Frankie Lane’s ‘Cool Water’, but I didn’t have any music, so he asked the pianist who said he knew the song. They put the microphone stand down as low as it would go, [hey, I’ve always been little], but I was still nowhere near it! The guy came out onto the stage with a wooden crate. He plonked it down on the floor, lifted me onto it, put the microphone in front of me, and it was just right. At this, you can imagine the reaction of the audience? They went wild! No, I didn’t get to sing on TV’s ‘Top Town Tournament’ for Preston, but I reckon I got the biggest cheer of the day at the audition. Another good lesson on how to handle an audience!

There was a guy, Ian Thompson, who lived in Peel Hall St. Ian was a couple of years older than me and he had a fabulous collection of Rock’n’Roll records so, of course, we used to congregate at Ian’s all the time. One of the things we used to do was to place two books flat down on the table with about six inches between them, then, with a pair of drumsticks, hit the book directly in front using alternate sticks. Then on every fourth stroke we’d strike the book on the right, keeping up the continuity of the alternate strokes while progressively getting faster. We used to count the right hand book strikes and see how many times we could strike it in one minute.

For some reason I seemed to be able to do this better than the others and Ian said I should consider being a drummer, because he thought I could do it. He then arranged for me to go and meet a cousin of his who happened to be a real drummer. Ian and I went to see his cousin, who had this magnificent, full, pearly white, gleaming, ‘Premier’ drum kit set up in his front room. It totally filled the room!! He played along with a record, ‘Skin Deep’ I think it was. You can imagine the level of noise in that tiny front room. Another lesson in how to get attention, play drums!!

I’m sure it was that visit, plus meeting and working with Bob Johnson that propelled me to the life I have led.

I pestered my Mum to buy me a drum kit and she did. I became the proud owner of a ‘Gigster’ drum kit, comprising a small bass drum, a snare drum, two tom-toms, [but with only a skin on the top of them], and a tiny 9 inch Cymbal—– Are we ready to Rock and Roll or what???