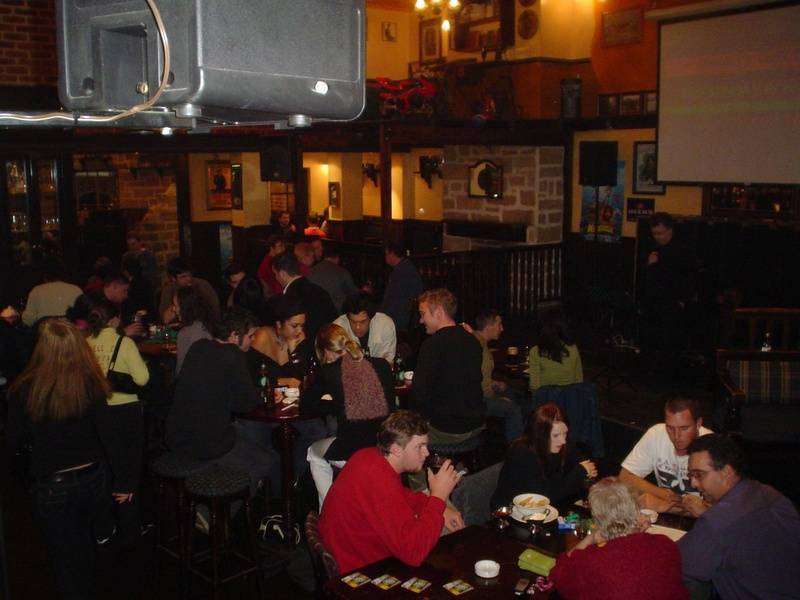 I put my singing on hold for a while after that and was having a rest, when in 1998 I was contacted by one of the agencies in Adelaide ‘Woodstock Entertainment’ and asked if I wanted to present Quiz nights.

The Agency was run by a guy called Peter Tilbrook who was a guitar player in a famous Australian band called The Masters Apprentices.

About six years earlier, in 1992, I had a foray into quiz night presenting with a show called Fame Trivia for Star. Entertainment and quite frankly it was a lot of fun! Here’s ‘An Ode To Desi’ which was penned by two fabulous fun girls who used to come to the quiz regularly…

I did about 250 of them and for at least 150, was ably assisted by a lovely young lady with a delightful sense of humour called Sam.

Then all of a sudden the Fame trivia quizzes stopped.

I can’t remember why they stopped, but to be honest I was glad they did. At that time Monkey Business was working a fair bit plus I had started Spruiking.

In fact I had started my own Spruiking company, and for the next three years, from 1992 to 1994 I was very busy indeed.

Now back to Woodstock Entertainment. On the basis that I had presented lots of quiz nights, Peter offered me two nights a week over the other side of town at The Eureka Tavern in Salisbury, South Australia. At the time personally I was in a quiz free zone… So I said yes. This time I was assisted by my partner Mos, who became ‘Mozzie the Marker’.

One of the venues ‘The Eureka Tavern’ also utilised my spruiking skills in their pokie room. In England they used to be called ‘Fruit machines’ but here in Oz. they are known as ‘The Pokies’.

The whole thing got rather serious and the rate of quizzes increased. A couple of years later I was head hunted by another agency in Adelaide, called Yellowstone Promotions.

Soon I was doing four and five quizzes every week with a show called Complete Trivia, right up to July 2006.

You could be forgiven for thinking that nothing could go wrong presenting a quiz night, but you would be wrong… Let me relate this little story to you, one night, at a regular venue we did every Thursday, it must have been in the summer because I remember it being quite hot and it was still light after we started the quiz which was normally 7.30 pm. As we arrived and I carried the gear in I was a little surprised because the room was full, and this was about an hour before the start, normally the players would drift in slowly so as the pub was full about 7.20 pm.

I struggled to set up my P.A. Amp and CD players on a table, and sort of got pushed into the corner. Whilst I was setting everything up, I was thinking to myself, gee this is a miserable crowd. There was hardly any ‘noise’ coming from this really long table that sat about 25 people on each side.

When I was satisfied that everything was working properly, I went to the bar and asked someone what was going on as I had this great long table set out right in front of me. The regular players now coming in had to stand at the back because their space had been taken up by the folks on the long table, none of whom turned out to be regulars of the pub.

I was then informed that it was a ‘wake’. They had just come from a funeral which was held a couple of hours before. Whaaaat????

The pub actually took a booking for over 50 people, then some bright spark said ‘I know’ let’s put ’em in Des’ quiz!!’

After I got over that shock, (I’ve never tried entertaining people at a Wake before), I set about encouraging people to play and hand out the answer sheets and pens etc.

I did my regular quiz players first, then kept looking over at the long table, but they were all very down. I’m thinking how can I get them involved? Next minute I’m walking up the the end of the long table, and just as I arrived, there was a movement at the other end of the table. As I looked up, I saw a big guy fall forward with a great BIG sigh, right onto the floor. The guy actually landed with his head and shoulders underneath the table which I had set up earlier with all my equipment!

Myself and one of the bar staff each took one end of the table, and, with the equipment still balanced on it, physically lifted it up and moved it away from the guy so’s we could make room for the Ambulance people, or as they are known here in Australia the Ambos, when they arrived. It turned out that the guy who hit the floor was the brother of the lady that had been buried earlier that day. Apparently he had a heart attack and the Ambos took him away. Then it was a case of ‘Oh Yeah the quiz…Well get on with it then.’

A true tale folks, a true tale, and you know what, they did it again with another wake party a few months later!! I reckon I would be the only quizmaster in Australia that has presented a quiz night to a funeral party not once, but twice.

Here’s how the quiz goes…

Consists of two rounds of twenty questions each. Subjects include, General Knowledge, History, Geography, Sports, T.V., Movies and Music. In each round of twenty there are sound clues…. Who had the hit? Name that tune, Which movie? Classical composer and Pick the year triple play.

In each round of twenty there are three ‘Spot’ questions where patrons put up their hand and shout ‘oy!’ if they think they know the answer. If I pick them and their answer is right they receive a drink voucher for use at the bar. These vouchers are normally keenly sought after.

Round one: Twenty questions with sound clues plus spots.

After round one all answer sheets are collected, marked and returned.

I read out the answers and team scores for the round.

Round two: Twenty questions with sound clues plus spots.

After round two all answer sheets are collected, marked and returned.

I read out the answers and the final team scores, thus declaring the winning top three teams.

Jackpot Round….. Open to all quiz players. Three questions.

The jackpot is normally worth anything up to $500.00 cash.

I presented these quiz shows here in South Australia from 1998 through to 2006. See below for venue history – the hotels and the number of weeks I presented there.

You know life is a funny thing, 20 odd years ago I wouldn’t have thought that I would even know about both Spruiking and Quiz nights and in fact, until I began presenting the Quiz Shows I’d never, ever, been to one. Yet both became very important to me for years and years.

I shall leave you with some Pics from a venue called Shenannigans a brilliant ‘Irish Pub’, which sadly, like many other ‘pubs’ is no more. This venue ceased operating in 2009.

A successful venue for Mos and I, we did Wednesdays for 138 weeks and also Sunday afternoons for 125 weeks. This excellent pub held about 120 people and most of the time we were full to capacity.